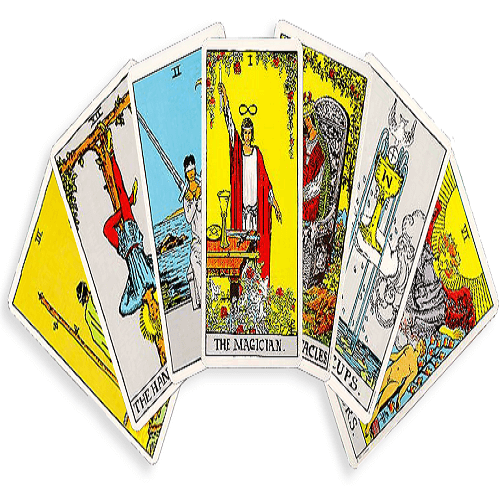 The reading of cards, a subset of cartomancy, which is the practice of using cards to gain insight into the past, present or future by posing a question to the cards. The reasoning behind this practice ranges from believing the result is guided by a spiritual force, to belief that the cards are instruments used to tap either into a collective unconscious or into the subject’s own creative, brainstorming subconscious.

The tarot; first known as trionfi and later as tarocchi, tarock, and others) is a pack of playing cards, used from the mid-15th century in various parts of Europe to play games such as Italian tarocchini and French tarot. In the late 18th century, it began to be used for divination in the form of tarotology and cartomancy.

Like common playing cards, the tarot has four suits (which vary by region: French suits in Northern Europe, Latin suits in Southern Europe, and German suits in Central Europe). Each suit has 14 cards, ten pip cards numbering from one (or Ace) to ten and four face cards (King, Queen, Knight, and Jack/Knave). In addition, the tarot has a separate 21-card trump suit and a single card known as the Fool. Depending on the game, the Fool may act as the top trump or may be played to avoid following suit.

Tarot cards are used throughout much of Europe to play card games. In English-speaking countries, where these games are not played, tarot cards are used primarily for divinatory purposes. The Trump cards and the Fool are sometimes called the Major Arcana, while the ten pip and four court cards in each suit are called Minor Arcana. The cards are traced by some occult writers to ancient Egypt or the Kabbalah but there is no documented evidence of such origins or of the usage of tarot for divination before the 18th century.

Look for a RIHHA Member

on the Members Page.